Set out below are some of the restaurants in Chiang Mai that I visited during my trip!

Xanadu Restaurant is on the 17th floor of the Furama Hotel just outside the city centre in Chiang Mai. The main attraction to Xanadu is the open air rooftop with panoramic views of Chiang Mai. There is a particularly lovely view of Doi Suthep. It was such a great place to watch the sunset and experience al fresco dining. It was clearly popular with the locals too given the tourists were very much outnumbered. I always take that as a positive sign!

We started off with a couple of cocktails trying the special cocktail – Orange Passion: vodka sweet vernouth, dry vermouth, orange juice, aroma bitter and meringue and an Amaretto Sour, both which were delicious.

Food wise we started off with a sharing platter consisting of some of the classic dishes from Xanadu including spicy sausage. We also had a stir fry marinated duck with red pepper and a roasted duck red curry. They had so much flavour and with such generous portions, it was difficult to finish it off!

Xanadu is a great restaurant in Chiang Mai, away from the hustle and bustle of the Old City and with amazing views. They also have a live band playing which adds to the atmosphere – perfect for a fun but chilled evening.

Serving a range of thai and western food, cocktails and beers, we stopped off here for a rest in between all of the shopping at the Sunday Walking Market. We had a lovely drink overlooking the market and people watched. Two drinks was around 200 baht – bargain.

Situated only a five minute walk from The Empress was a lovely Thai restaurant called Kao Kab Kang. We were greeted by friendly staff who gave us menu recommendations.

We started with Rice Crackers with minced pork coconut cream sauce which was so amazing. The crackers were light  and crispy with a hint of sesame  and the sauce complimented it perfectly. 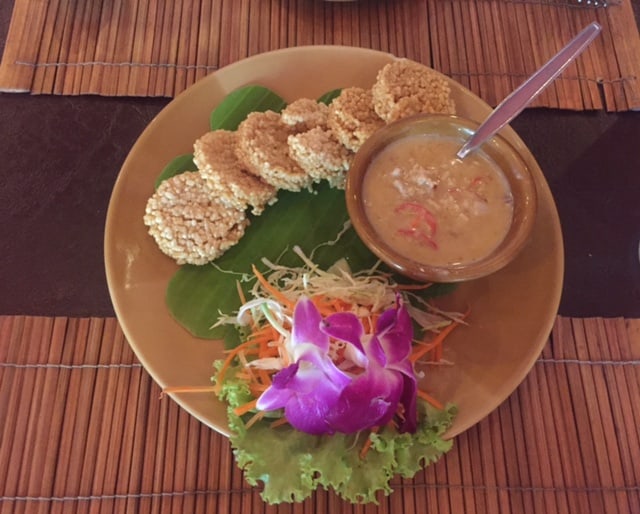 Following that we had Beef Stir Fry with black pepper and a Sweet and Sour Chicken with special fried rice and white rice which came in a TEDDY bear shape which was so bloomin’ adorable. The food and service was excellent, the food very reasonably priced (around 400 baht in total) and I would definitely recommend Kao Kab Kang.

We decided to stop for a restbite whilst walking around the old city in Chiang Mai.  I was attracted by the red lights and lanterns outside Hot Chilli. As I came closer saw they had swings and lots of colourful artificial flowers so just had to give it a go!

We had a couple of drinks and shared the hot basket appetizer – wontons, spring rolls, chicken wing, shrimp cake and shrimp crackers. The food was pretty average and the staff were not particularly attentive. However it was a cute place to stop off at and worth having a drink just for the surroundings!