Mykonos is renowned for its awesome night life, mainly in the form of beach parties! As we visited in October, the official party season was over. That said, we managed to find one beach party still open a numerous bars in Mykonos serving fantastic cocktails.

180 sunset bar in Mykonos is absolutely worth the climb up the steep slopes! There are signs along the way to keep an eye out for. Whoever opened this bar is a genius! It is so spacious with unobstructed views of the gorgeous sunset. One of the owners even stops people from taking too many pictures so customers can relax and enjoy the atmosphere.

There are a number of tables and sofas or large cushions to sit and chill out on the floor. The DJ plays low key beach club tunes and it really is something pretty special.

180 Sunset Bar serves a variety of cocktails (€16) which looked pretty amazing. We opted for a bottle of prosecco (€40) which is actually pretty good value for Mykonos! This is one of the best bars in Mykonos and not one to be missed!

You may have heard of the infamous Nammos and Kalua beach clubs in Mykonos. Even if these had been open I think I would have felt out of place in a more pretentious environment. When I arrived at Tropicana Beach Club I could tell it was right up my street! The tunes were pumping from 4.30pm, the staff were so friendly and the atmosphere was light and fun. I would love to see this place in the height of summer as it would be absolutely buzzing. We were given some shots on arrival and sat outside in the sun (no cover charge).

They had 2-4-1 cocktails all night on frozen Sex on the Beach and Miami Vice (€14) which were fantastic. Other cocktails were priced between €10 and €12 and including the classics and some signature cocktails.

The club attracted a whole host of people ranging in all ages and nationalities. The music was general commercial with a good beat and were having a great time! The beers are reasonably priced at €5, a small bottle of wine was €9 and shots are €5-6. Obviously we had to get up on the stages to have a dance later in the night! Yes it felt like I could have been in Magaluf or Thailand but I absolutely loved it!

Another bar known for its parties is Scandinavian Bar in the centre of Mykonos town. Customers tend to just party in the streets outside the bar as there is limited space inside! Drinks are priced at around €6 for beer and wine and €10 for cocktails. Make sure you try some of their shots (including “sperm”).

Following those we had a couple of glasses of wine. This is one of the best bars in Mykonos to visit for the sunset and also has a restaurant downstairs.

This bar is ideally situated in Little Venice and has more space outside for sitting on the terrace watching the sunset than other neighbouring bars. There are a number of cocktails available and, of course, beer and wine. Definitely a bar to consider for the beautiful sunset! 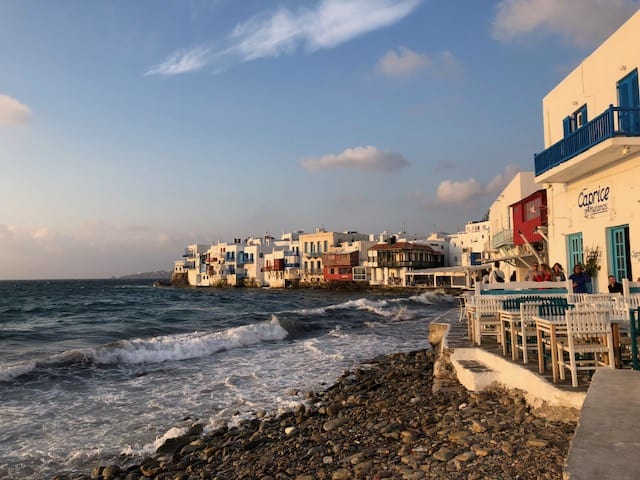 Click Here to read about our hotel in Mykonos, Here for some awesome restaurants in Mykonos and Here for things to do in Mykonos